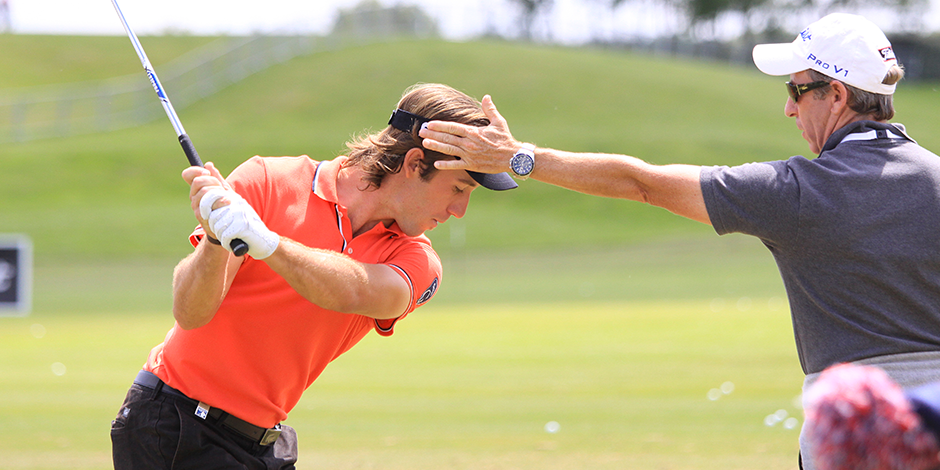 Pelvic control refers to the ability to move the pelvis independently of the rest of the body. The pelvis is often called your hips for the purpose of analysing the golf swing and for those of you familiar with the movie Happy Gilmore, you’ll know that “it’s all in the hips”.

It may seem strange to think that distance is achieved from control rather than strength or power.  Have you ever thought ‘I’m just going to make a nice easy swing on the ball’ and sure enough you hit the ball further than you expected?  This is often due to improved timing and sequencing of the swing.

Great golfers all have the same sequence but not the same swing.  Rory McIlroy and Jim Furyk have very different looking swings, yet their kinematic sequence is very similar.  This is what allows them to generate a powerful consistent swing.

Separating the good from the bad

The key difference between a good and bad kinematic sequence is the ability to independently create movement at the pelvis (hips) separate from the thorax (chest) and to independently slow movement.

At the start of the downswing the sequence of movement should be pelvis, thorax, arms and club.  As the swing approaches impact, the segments sequentially slow to transfer energy from one segment to the next in the same order. This creates a ‘cracking of the whip’ at impact and increased club head speed.

So what does this have to do with pelvic control?

If you don’t have the ability to move the pelvis (hips) independently from the thorax (chest) then you will not be able to properly sequence the swing.

You may have tried in the past to initiate the downswing with your pelvis (hips) with little success or been told by a golf pro that this is what you need to do but again had a difficult time performing the action.

What often occurs instead is a swing where all segments fire at the same time, causing an inefficient swing that lacks power and consistency.

How to get it right

It’s best to start with an assessment of your ability to control your pelvis independently, which can be performed by a certified medical professional. If it is functioning well then some simple drills and lessons with your golf pro is the best option.